The World Has Ended, the Chain of Command if Broken. You are on your own. 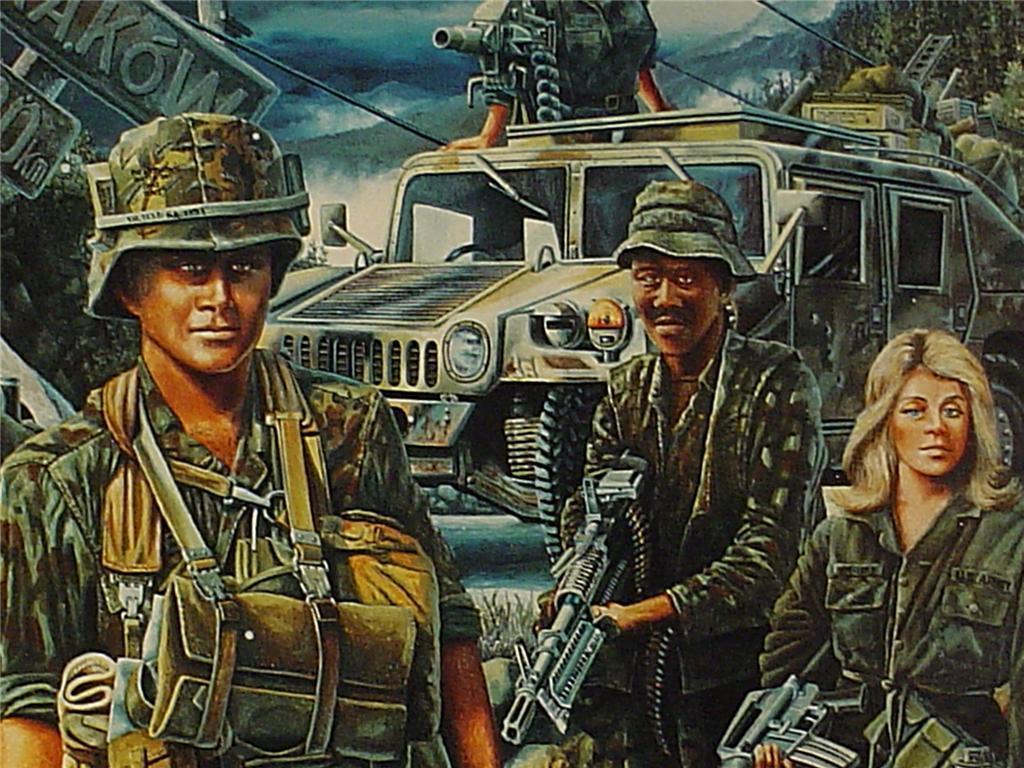 Twilight 2000 is a role-playing game set in the aftermath of World War III (the "Twilight War"). The premise is that the United States/NATO and the Soviet Union/Warsaw Pact have fought a lengthy conventional war, followed by a (limited) nuclear war with all its consequences. Characters in the game are survivors of the war.

In 1995 a series of Sino-Soviet border conflicts expanded into general war between the Soviet Union and China. The Sino-Soviet war rapidly escalated from conventional warfare into exchanges of nuclear chemical and biological weapons. In 1996 a cabal of East German and West German military officers seek to reunify their country. Unified German forces stage a coup d'état against the Group of Soviet Forces in Germany. The US and NATO allies initially attempt to stay out of the war, but are quickly drawn into the European conflict.

Between 1996 and 1997 a largely conventional war is fought between NATO and Warsaw Pact forces throughout Europe. There are limited exchanges of battlefield nuclear weapons, and chemical and biological weapons. During Thanksgiving 1997, the Soviet Union launches a surprise first strike against targets in the United States and Europe. The US and Great Britain launch retaliatory nuclear strikes against the Soviet Union.

In the aftermath of the nuclear exchanges, both blocs struggle to recover from the damage. The war continues – despite increasing shortages of men, equipment, and fuel. In the United States there is a breach between the civilian government and the Joint Chiefs of Staff. An open rift develops between "Civgov" (the civilian government) and "Milgov" (the military government), which leads to a low-intensity civil war.

By the summer of 2000, the European theater of operations had been fought to a near stalemate. In one final effort to break the deadlock and end the war NATO forces planned a summer offensive across Northern Poland and into the Baltics, but the offensive ground to a halt in the face of a Warsaw Pact counterattack. Several divisions & corps on each side were virtually eliminated. In the chaotic aftermath, supply lines are lost, high level command breaks down and armies in the European theater lose cohesion beyond the platoon unit. Some go “native’ and integrated with the militias of independent “free cities", others turned into gangs of marauding bandits and some small groups of surviving soldiers sought to find their way home.

The current campaign: The Silent Aftermath follows a squad of soldiers, including Doc, Obama, and Caboose as they survive throughout occupied Poland mere hours since the advance of the [[22nd Expeditionary Force]] ended in a complete failure on both sides.

Ascendant campaigns can view previous versions of their pages, see what has changed (and who did it), and even restore old versions. It's like having a rewind button for your campaign.

We've already been saving your edits, so if you upgrade now you will have instant access to your previous versions. Plus, you get a 15-day free trial, so there's nothing to lose.

I'm sorry, but we no longer support this web browser. Please upgrade your browser or install Chrome or Firefox to enjoy the full functionality of this site.